Here's the July PuzzlOR question, courtesy of John Toczek. Now that the competition is over, let's go to town.

A frog is looking to catch his next meal just as a fly wanders into his pond. The frog jumps randomly from one lily pad to the next in hopes of catching the fly. The fly is unaware of the frog and is moving randomly from one red flower to another.

The frog can only move on the lily pads and the fly can only move on the flowers. The interval at which both the frog and the fly move to a new space is one second. They never sit still and always move away from the space they are currently on. Both the frog and the fly have an equal chance of moving to any nearby space including diagonals. For example, if the frog were on space A1, he would have a 1/3 chance each of moving to A2, B2, and B1.

The frog will capture the fly when he lands on the same space as the fly.

Question: Which space is the frog most likely to catch the fly?

Lately, I've been playing with the Julia language, so I'll do this one using Julia. 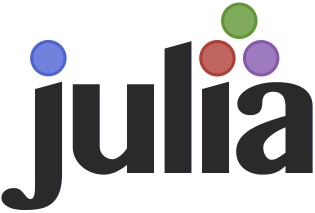 Thanks to the awesome IJulia library, we don't have to give up the IPython notebook. For me, that's a huge selling point.

Now that we have consistent way to refer to the states that the fly and the frog can be in, we will create adjacency matrices that define how they are able to move.

By convention, element $M_{ij}$ of an adjacency matrix tells you if state $j$ (the column) is reachable from state $i$ (the row). For example, if the fly is on square 9 then the only two adjacent nodes with flowers that it can reach next are squares 6 and 8. Therefore, in row 9 of the flower adjacency matrix, only the 6th and 8th elements are equal to one (indicating adjacency) while the rest are equal to zero (meaning they are unreachable from the current state).

We'll also define a function to normalize the rows, and turn them into conditional probabilities. (Much more on this in the spy catcher post.)

Using this function, we'll get the stochastic matrices for the fly and frog.

Now let's write some functions to simulate the frog and fly game.

Having set up all the necessary machinery, we'll run 50,000 iterations of the simulation.

How many moves does the game last?¶

Here are some descriptive statistics for the number of moves:

So on average, it took around 12 moves for the fly to get eaten. The fact that it takes so long may be a little less surprising when we consider that the fly has to random-walk itself out of the top-right corner down onto the lily pads before even being reachable by the frog.

We can also look at a histogram of the number of moves:

Some of the games lasted a surprisingly long time for such a tiny 3x3 board.

What was the most common end square?¶

So we have our answer, which is that square number 8 was where the frog most often catches the fly.

Next: Using Pelican to blog with IJulia notebooks (or other languages)