Solving the Bayesian German Tank problem with PyMC and PyStan

I recently came across the German Tank Problem in the docs for Sampyl, a fairly new Python library for Markov Chain Monte Carlo sampling. This problem is also an exercise in "Think Bayes" by Allen Downey, although there it was called "the locomotive problem." 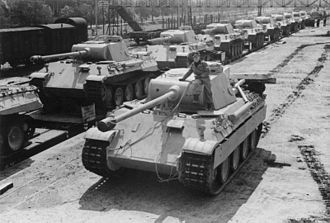 Suppose four tanks are captured with the serial numbers 10, 256, 202, and 97. Assuming that each tank is numbered in sequence as they are built, how many tanks are there in total?

The problem is named after the Allies' use of applied statistics in World War II to analyze German production capacity for Panzer tanks, and while this statement of it is hugely simplified, the actual story of how that turned out is fascinating:

After the war, the allies captured German production records, showing that the true number of tanks produced in those three years was [...] almost exactly what the statisticians had calculated, and less than one fifth of what standard intelligence had thought likely.

We start with a simplified story about how the data is generated — the generative model — and then attempt to infer specifics about that story (the parameters) based on what data we ended up with. In other words, we're constructing a simple model of how the universe could be arranged in such a way that we ended up seeing these four numbers, because we assume that random chance was involved and things could have turned out differently.

Of course, we actually start with the data $D$ rather than the parameter $N$, and we could have observed these four serial numbers under many different choices of $N$. The key is that some choices for $N$ are much more likely than others. For example, if $N$ was actually 5,000 then it would be a really odd coincidence that we happened to see all small numbers.

The Wikipedia article explains both the frequentist and Bayesian approaches, and the example in the Sampyl docs does a good job of explaining the setup for the Bayesian version. Here's the gist: we want to know the posterior probability of the number of tanks $N$, given data $D$ on which tank serial numbers have been observed so far:

The right-hand side breaks down into two parts. The likelihood of observing all the serial numbers we saw is the product of the individual probabilities $D_i$ given the actual number of tanks in existence $N$:

The prior over $N$, which we know must be at least as high as the highest serial number we observed (call that $m$) but could be much higher:

The MCMC strategy will be to try a bunch of different values for $N$, see how likely they are (compared to one another), and assemble the results of the sampling into a distribution over $N$. The solution implementation with Sampyl was interesting, but the project is still early so I wanted to give it a shot using two other popular MCMC libraries.

PyMC seems to be most one of the most commonly used libraries for MCMC modeling in Python, and PyMC3 is the new version (still in beta). The tutorial in the project docs is a good read in and of itself, and Bayesian Methods for Hackers uses its predecessor PyMC2 extensively.

PyStan "provides an interface to Stan, a package for Bayesian inference using the No-U-Turn sampler, a variant of Hamiltonian Monte Carlo." Stan, the underlying package, is designed to be a successor to JAGS, BUGS, and other hierarchical modeling tools.

Here's the same model implemented with PyStan. Two notes about how this differs:

The mean was again 384 and the median was 323, closely matching the results from above as expected.